I’m here on the other side of the country  (Tacoma, WA) for a week to visit my best friend.  It’s been magical so far, and I’m really really sad that I’m leaving in two days.  The forest here is beautiful.  Apparently this area was where they filmed Ewoks: The Battle for Endor.  I suppose that would be neat, except I’ve never seen the movie, which isn’t surprising really because it wasn’t all that popular or well known.  And there’s a volcano in the backyard.  An icy, snow-covered one at that.

Mt. Rainier looms over the whole place like some sort of silent ice guardian.  Which is completely awesome, except for the fact that it is also a very active volcano that is just waiting to blow up.  There are volcano evacuation signs here.  I kid you not.

We drove up the mountain to Paradise, a base camp of sorts complete with a visitor’s center and a lodge.  Nothing was open because everything is still completely buried in snow. 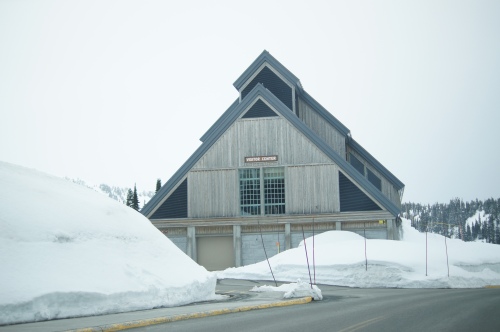 Closed due to obscene amounts of snow.

We got fairly close to the top, but we couldn’t see it because the snow and the sky all seemed to blend together.  It was like standing in a great vast field of whiteness, some sort of great circle of oblivion that would wash you white along with it if you weren’t careful. We watched the skiers and the hikers with their gear and decided that this mountain was unforgiving.  Our cells had no service and one wrong move in the wrong direction would leave us stranded with nobody around to hear us.  It was raw beauty, fascinating, dangerous, and terrifying all in one.

We would never survive here.

In the visitor bathrooms (mercifully left unlocked for us), there was a notice asking people to keep an eye out for a group of missing hikers or their equipment.  They’d been missing for over three months.  Sometimes it’s easy to forget that nature is perfectly capable of crushing us dead.

Which is why I like going off into semi-safe places in nature.  It reminds me that we’re painfully mortal, but that we can be pretty persistently amazing too.  People scale to the top of dangerous places and make it down alive.  I get so comfortable in my own safe little nest in the world that I forget how wildly dangerous and beautiful the rest of it can be.